I was deeply moved by the huge support that we received. Everyone welcomed us and was very friendly in supporting us. Everyone wanted to talk to us and ask about the campaign.

I really enjoyed the music and there were also some books, painting and some gifts for the raffle ticket winners. We raised more than £350 overall.

I was really happy and impressed with the Young Socialists members – it’s delightful to see young people interested in politics and wanting to help refugees. They organised it really well.

We were given the opportunity to say a few words and give out our draft trade union motion. After the speech we were also interviewed by some of the local media.

I want to thank the Young Socialists members for organising a very successful gig and an enjoyable evening. 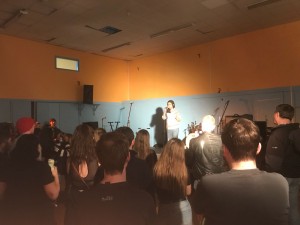 Refugee have rights for free healthcare