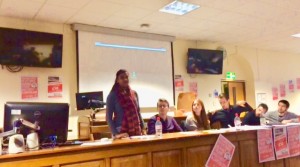 Over 100 students attended the annual Socialist Students conference at Birmingham University on 24 February.
The day highlighted the successes of Socialist Students’ work over the last 12 months and the growth, not only of Socialist Students in a number of areas, but also in the popularity of a socialist ideas and search for an alternative to the capitalist system among students and young people.
I started the discussion on the role of students in the fight against austerity. Other speakers included a Birmingham University lecturer, who spoke about the ongoing lecturers’ strike action in defence of pensions and Richard Beddows, Unite convenor during the Birmingham bins dispute.
Meeting the day after the first wave of lecturers’ walkouts, there was an outpouring of solidarity towards the striking lecturers. Students later discussed and voted in support of Socialist Students building for student strikes alongside the industrial action being taken by the University and College Union.
Richard spoke about the bitter dispute between refuse workers and their employers, the Labour-run Birmingham council. Richard reaffirmed the importance of student and worker solidarity.
Two sessions were then run side by side. The first was to discuss the mass movement of youth and workers in Catalonia at the end of 2017. This was introduced by Jose Antonio Lopez Bueno, organiser for the Sindicato de Estudiantes (a socialist-led student union) and a member of Izqueirda Revolucionaria, the Socialist Party’s sister organisation in the Spanish state.
The second session, introduced by Socialist Students national organiser Claire Laker-Mansfield, marked the anniversary of the revolutionary strike wave which swept across France in 1968.
After taking elections on a range of motions submitted to the conference by the elected national steering committee and Socialist Students groups around the country, conference voted to elect a new steering committee, which has grown substantially since last year.
The day finished with a rally which highlighted the international links Socialist Students has to a whole host of socialist organisations across the world.
Conference received messages from young activists and co-thinkers in Hong Kong fighting against clampdowns on democratic rights by the regime, heard from Refugee Rights organiser Lawanya Chandra, and a greeting from Nigerian co-thinkers running a campaign in defence of education rights. Speakers also included Socialist Party organiser Lenny Shail and William Campbell from Socialist Students Scotland.
The conference demonstrated the serious work countless Socialist Students groups are conducting up and down the country, building the forces for the socialist transformation of society in schools, colleges and universities.