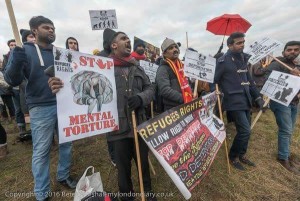 For mass action against evictions

Fight for decent jobs and homes for all

300 refugees are facing eviction by the private anti trade union company SERCO in Glasgow. Change of lock notices are in force from today with evictions scheduled in less than a week. These destitute refugees many of whom are suffering mental trauma will be thrown out onto the streets unless these evictions are halted.

Mass physical resistance can be effectively organised against the SERCO evictions, including the tactic of mass occupations of properties. This has been successful in Glasgow before, in defence of refugees, and also in  the mass campaigns against the poll tax, the recent bedroom tax  and of course the immortal rent strikes of the early 20th century led by working class women. Workers, trade unions, community organisations, tenants groups, students unions and youth must organise together to take mass action against the evictions. The SNP council and some Housing Associations say they oppose the evictions they must join and support mass action and refuse to co-operate with SERCO.

SERCO are clearly hoping the racist anti refugee propaganda in the right wing press echoed by Tory politicians and the far right will mean they can get away with these evictions.

We need a united mass struggle to defend refugee rights and fight for decent jobs, homes and services for all. Trade Unions,the Labour movement and tenants organisations need to take this up and link it to the fight back against wider austerity. There are often at least  several hundred people a night sleeping rough in Glasgow city centre, the refugee welfare organisations are right to warn of a humanitarian crisis in the city. Council homeless services and other support such as social work have been cut to the bone by the SNP and previous Labour administration’s passing on Tory cuts. Tens of thousands of people are on the Housing Association waiting lists in Glasgow and many are struggling to pay the rocketing rents of private landlords. This why this is fight that affects all working class people, all of us are struggling and a few unpaid bills away from eviction or foodbanks.

The refugee crisis is caused by capitalism. We are now witnessing the highest levels of displacement on record. An unprecedented 65.6 million people around the world have been uprooted from their homes by war and environmental catastrophes. Among them are nearly 22.5 million refugees, over half of whom are under the age of 18. Those refugees who reach Britain usually find themselves in dire circumstances. It often takes many years for asylum seekers to be accepted by the system as refugees. They have to go through different screening and interviews for their cases to be heard. Most of these have inadequate language translators and lack of opportunities for the individuals to explain their cases. They are also denied the right to work and are forced to live on a bare minimum of £5 per day to pay for their basics such as clothing, food, drinks, transport. Most asylum seekers are living in poverty and experience poor health and hunger. Many families are not able to pay for their basic needs.

Thousands of children seeking asylum in the UK are being denied access to education, according to organisations who work with refugees. There is no legal requirement for local authorities to provide education for children waiting for dispersal from initial accommodation by the Home Office. The UK is the only country in Europe that does not have a limit on the length of time that someone can be detained. There are individuals in detention centres who have been detained for years that are still not given the results of their case. · In the UK, asylum seekers are encouraged to work within the detention centre for £1 an hour yet they are not allowed to work when they are outside and are forced to look for alternative ways to earn some money to live on. This makes them vulnerable to be exploited by bosses who employ them illegally on slave wages, some on as little as £3 per hour.

We need a socialist alternative to the racist Tory government the vicious private contractors who support them. As long as we have capitalism we will have war racism and poverty. We need a mass party of workers and youuth that fights for socialist policies.

Protest against move by Serco to evict refugees