On the 7th of April we launched the refugee rights campaign in Manchester with our first public meeting. The meeting was well-attended by a mixture of new refugee contacts and Socialist Party members. The countries the refugees came from ranged from Somalia to Sri Lanka, but all had had similar experiences of a system which is designed to keep people in limbo – denied the right to work, or claim benefits – their only option is to work illegally which gives the Home Office the perfect reason to detain and deport asylum seekers back to their home country. One attendee spoke of his friend being deported back to Iraq where he was murdered by Islamic State shortly afterwards.

Mathan from the Refugee Rights committee spoke about the vital importance of the campaign. He has experienced being detained and the exploitative conditions of the detention centres, where companies like Serco make huge profits from paying detainees £1 an hour.  They have so far been involved in several protests, and are in contact with legal aid solicitors who can represent refugees and help get their asylum cases heard.

It was clear that there is a lot of work to be done. There was general agreement about how difficult the situation is, but the aim of the campaign is to help empower refugees to get organised because they do have power to change that situation. We agreed at the meeting that our next action will be to hold a protest outside the Home Office reporting centre in Salford, to build awareness and grow support for the campaign. We received a lot of support when we were building for this meeting, so we are hopeful that it will only continue to grow over the next months and years.

We cannot help with individual cases but we can help with directing you to a legal aid solicitor and with campaigning for long term change. None of us will be liberated until the most oppressed in society are liberated. 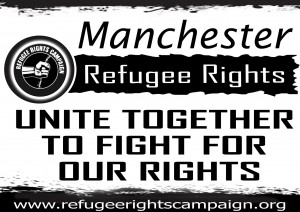 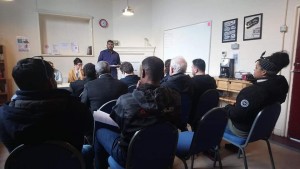 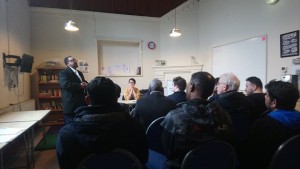 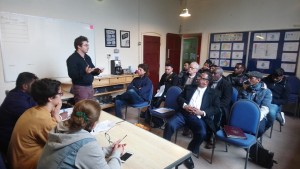 Press Release: Refugee rights groups call for an end to the deportation of refugees to Rwanda.